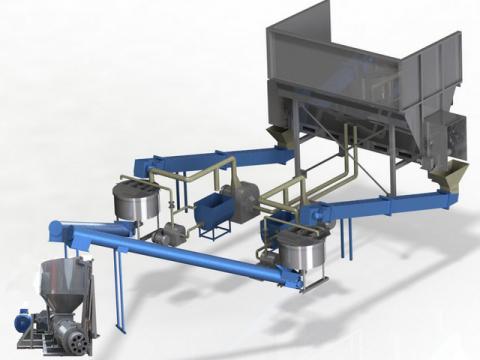 I. The purpose and the principle of operation
II. The installation diagram
III. Performance attributes

The kind of the fuel produced: liquid (kind of masut) and solid briquetting.
Operation mode: semi-automatic.
The productivity of the plant: 500 kg of the liquid fuel and 500 kg of the solid fuel.
The capacity of the raw material bunker - 4 m3.
The number of bunkers - 2.
The size of raw material fraction used for the processing - Зmillimeters.
The size of particle in the liquid fuel - not more than 5 micromicron.
The capacity of processing plants - 500 litres.
The volume for storage - 1500 litres.
The percentage of the coal suspension composition - 50/50 ± 20 % (water, coal).
The percentage of the liquid fuel composition:

I. The purpose and the principle of operation

1. Plant is designed to produce new kinds of fuel using traditional sources of raw materials - coal, peat, oil or masut with new characteristics in the form of peat-coal briquettes and liquid fuel.

The basis of the suggested technology is in a deep processing of wastes of fuel extraction and attaching new characteristics which satisfy standards.

As a raw material the peat and waste of coal mining are used. Oil and masut are used as modifiers. The suggested plant solves the problem of using the technology of raw materials processing in industry.

In the project there are taken into consideration the posibility of plant scaling according its productivity, power inputs, transporting characteristics, automation and the end product quality control.

2. The present plant produce 2 kinds of fuel - peat-coal briquettes and liquid fuel (kind of masut). Since both kinds of fuel have similar composition and differ only in the receipt, it allows to combine their execution in one composite plant.

On the basis of the plant process flowsheet, there have been designed a system of mechanisms which are necessary for the realisation of technological limits in the process of getting the end product.

The plant is built according to a bloc sceme. Auger feeders and shelf conveyers (by loading and discharge of the drying oven) have the function of transfers between blocs. The suggested plant consists of 4 major units: