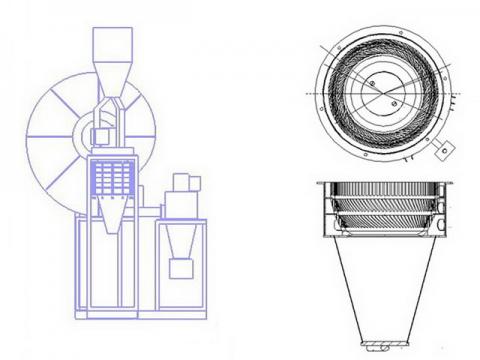 After-harvesting processing of grain-crops is the most important working operation, which predetermine the effectiveness of the harvesting process, quantity and quality of the grain in general. The main reason for the high after-harvesting loss of the grain is it humidity, natural including, organic and dust admixtures, and beaten grains that lead to a quick heating of the grain mass and its “burning” while storage. The drying of the grain in the present drying machines is energy-consuming and expensive process. Moreover not all factories have drying machines and the productivity of these machines is very limited.

For the improvement of the humid grain preservation, simplification and reduction of the marketable products prices we suggest a system of modular plants for the deep after-harvesting grain processing for its following storage and processing. Unlike the existing technology of refinement-normalization-drying of the grain and leguminous plants which uses many bulky, energy-consuming and expensive winnowing machines and standart grain dryers, the syggested here process of the processing of grain-crops, leguminous plants and oil cultures cosists of 3 operations:

Suggested working operationa are carried on in the developed by us modular units with the productivity of 10 ton per hour: the aerodynamic vortical normalizer, the rotary classifier-separator and the recirculating drier with  the ionization and recirculation of the energy carrier. The technological process of the grain processing consists of:

For the initial after-harvesting processing the grain raw material is delivered in the vortical aerodynamic normalizer, in which the separation of light and fine admixtures, the drying and the antiseptization by the ionized stream of the energy carrier occur. After such processing the grain can be kept more than 25 days withou any loss of quality. The re-processing of the grain in the normalizer in 25-30 days allows to dry the humidity, which is diffused out of the grain volume on its surface; it guarantees the sufficient duration of the grain raw material storage. The enrgy intensity by the grain processing in the normalizator is not more than 0,7 kilowatt-hour per ton. For the improving of the grain and its separation on the fodder grain, the bread-grain and seeds the grain blend is separated on required classes using the rotary classifier, the acuty of separation - 0,5%, energy intensity - 0,7 kilowatt-hour per ton. The number and size of classes are determined by technological objectives, the sort of the initial grain raw maetrial and is carried on with the help of the rotary plant of the necessary mode. If it is necessary to bring the humidity of the initial grain to the standard (for the continuous storage) the grain is dryed in our drying machine wiht the recirculation of the energy carrier and the economizer, where the energy carrier - the hot air is circulated in the circuit with the ionizer. It altogether predetermines the reduction of power inputs for the process of drying in 40–65 % in comparison with standard drying machines. The drying machine works without fuel and its cost is in 3–5 times lower than that of the existing.

The normalizer for the preliminary grain heating before the drying maching permits to increase it productivity in 40%. The basis for the developing of the high-efficient machines with the suggested system of the deep processing of grain-crops is results of continuous researches in the Soviet Department of the Russian Academy of Science. On basis of these researches there were developed physical, thermodynamic and  engineering samples which constitute a profound base for the developing of the processing hardware, forming the system of modular compact-plants. Major advantages of the suggested system for the processing-normalizing of the grain-crops are its generality, simplicity, efficiency and low metal-consumption of the developed hardware, new environmentally appropriate and resource-economy technologies for the grain proceesing and the high quality of the produced grain and of products of its following processing. The plant for the grain normalization based on modern scientific achievements, meets world standards and has a high competitive ability because of the absence of the normalizier with similar characteristics on the world market. Considering performance attributes the normalizer can be developed for any farm with the productivity from 1,0 up to 100 ton per hour.

According to estimates and marketing researches the pay-back period of the normilizer is 5 months. The predictable want of Russian for this equipment is about 300 000 pieces.

We suggest the organization of the production and sale of the whole complex of machines, plants and technologies as well as separate machines and plants for the after-harvesting processing of the grian mass into high-grade cash grain.